Habits that Make Everything Else Easier or Unnecessary 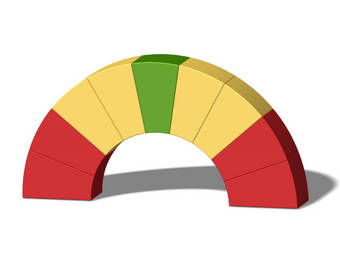 At HydroSwell we believe that by focusing on creating healthy habits, as opposed to focusing on short-term fixes you'll set yourself up to live an amazing life!

As you know, creating healthy habits is easier said than done. This article will teach you about a rare type of habit, called a keystone habit, that will get you the highest return on investment for your time and effort!

First off, what is a keystone? In the image above, you see a picture of an arch. In the middle of that arch, there's a green brick. That's the keystone.

The keystone is crucial because it's what holds the whole arch in place. Remove it, and the arch falls.

Keystone habits are habits that seem to be a catalyst for other healthy behaviors.

Researchers have identified one Keystone Habit that is a catalyst for improving overall health.

But I Thought Abs Were Made in the Kitchen?!

Before you click away because you don't want to hear someone tell you to exercise for the millionth time, hear us out.

There are dozens of behaviors you could choose to get healthier.

You could, eat more vegetables, drink more water, get adequate sleep, meditate, the list goes on and on and they're all good things.

For most people, their first instinct is to do them all but that's the quickest road to failure.

The key is to focus on one habit at a time.

BUT, there's a loophole of sorts...

Researchers have found that people who focus on developing keystone habits seem to develop other good habits simultaneously without additional effort.

People who create an exercise habit, tend to start to...

It seems that keystone habits sort of break the behavior norms in the sense that they allow us to create more than one good habit at a time!

The truth is, researchers aren't 100% sure why.

Some speculate that it's because when people exercise, they don't want to undo their progress by engaging in unhealthy behaviors.

They have skin in the game so to speak.

All that matters though is that it works.

If you have a laundry list of things you should be doing to improve your health and you don't have a habit of regular exercise yet, start there.

Start simple by going on a walk each morning or better yet, create an adventure out of it. Go surfing or go on a hike. Find a way to combine your exercise with an experience you enjoy and it will become something you look forward to!

Keystone habits are the habits with the highest return on investment for your time and effort, so take advantage and make a habit of regular exercise!

Remember, it takes 66 days on average to create a habit so commit to 66 and get started today!

Back to Habit Science Home