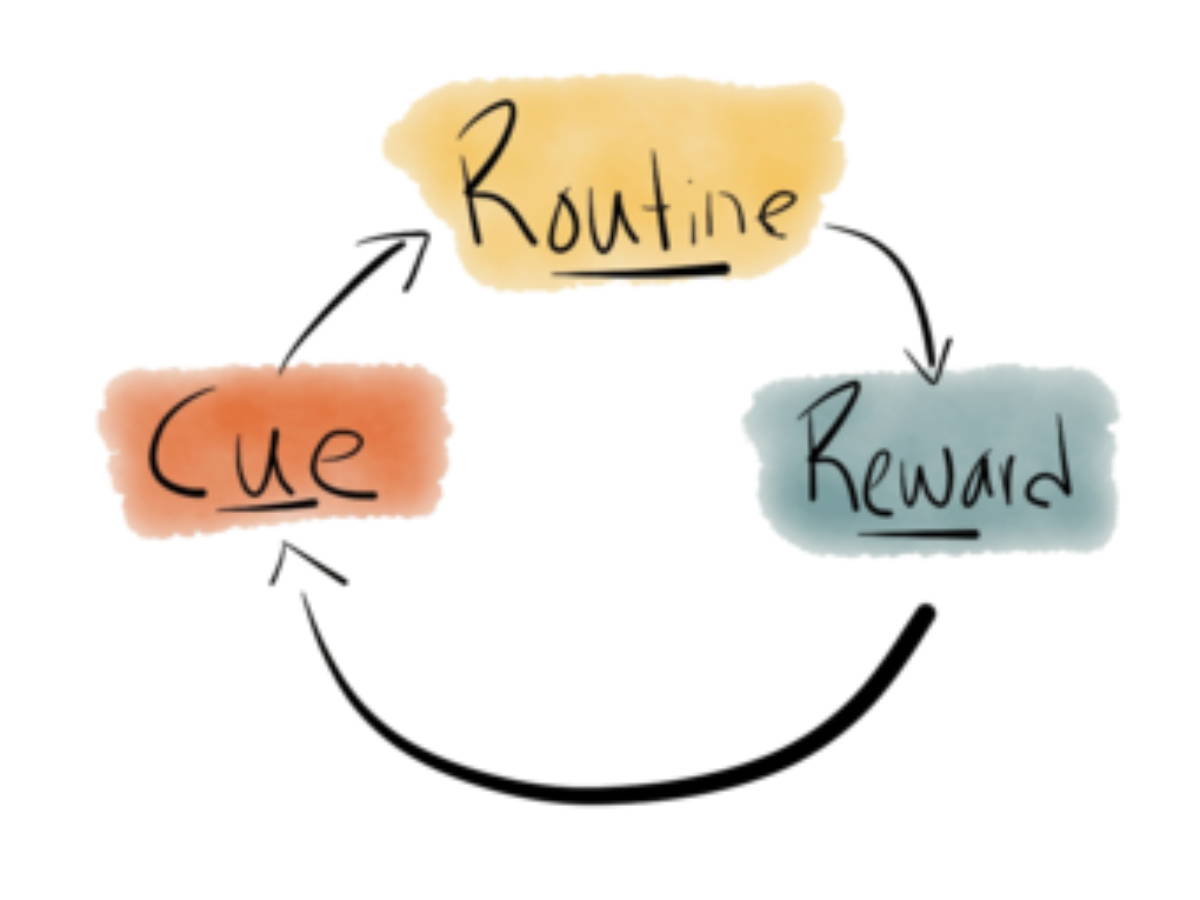 A group of researchers at MIT identified a pattern that all habits have in common. They called it the habit loop. The image above shows the habit loop in action. It’s made up of three parts. A cue, a routine, and a reward.

CUE:  Something that makes you want to do something.

ROUTINE:  Something that you repeatedly do in response to the cue.

REWARD: Something satisfying that you get from doing the routine.

The Habit Loop In Action

Imagine that each day at work, your company bakes cookies. The smell of fresh-baked cookies makes your mouth water so you grab one and eat it. After you eat the cookie, your brain's reward system lights up from the sugar.

In this simple example, the smell of fresh-baked cookies is the cue, eating the cookie is the routine, and the reward is the sugar.

Each time you repeat this loop, the habit gets engrained deeper into your brain making it harder to resist those cookies.

Know thy enemy. We all have habits, some good and some bad. To be intentional about developing good habits and breaking bad ones, you've got to understand how they work.

Ask yourself what the cues, routines, and rewards are of the habits you currently have. Maybe you get stressed (cue) and respond by eating sugar (routine) and would like to stop doing that.

You have some options. The first is to try to avoid the cue aka. stress.  This is a good idea but it's probably not possible 100% of the time, so you need a backup strategy. How about switching out the junk foods (the routine) for something healthy and satisfying? May we suggest ProLoco, our hydration + protein drink.

If you want to create a good habit, you can use the habit loop too. A common cue for a habit is "time", so if you wanted to create a habit of exercise, plan to exercise at the same time each day. Eventually, your brain will automatically signal that it's time to exercise at that time. You can also set up rewards for good behavior that will communicate to your brain that what you're doing is good and should be continued.

This is just a high-level overview of how habits work. There are textbooks written on this subject so there is a lot more to get into but if you're aware of the habit loop and have some ideas on how to use it to hack into your brain, you'll be well on your way to a healthier version of yourself!

Back to Habit Science Home