Skip to content
FREE Shipping on all USA orders through July 5th! 🇺🇸
You can buy Gatorade in pretty much any convenience or grocery store.

It's important to understand the origins of Gatorade because it paints a vivid picture of who it was intended for and who it wasn't. 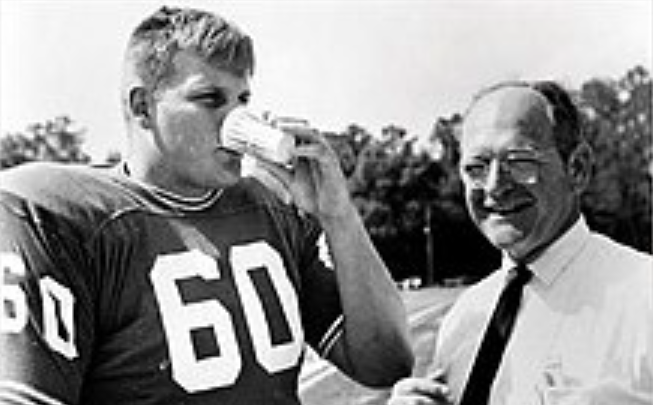 In the picture above, you can see a member of the Florida Gators football team knocking back a cup of Gatorade next to Dr. Robert Cade, one of its inventors.
Gatorade was originally designed back in 1965 to supplement massive sodium and water loss of football players in the humid Florida heat.
In a single practice, players are recorded to have lost an average of 8.14 quarts of fluids in the form of sweat.
Back in that time, coaches didn't even allow players to drink water during a game because they believed it made them sluggish but they agreed to allow Dr. Cade and his team to begin testing Gatorade on the freshman players to see if it helped with athletic performance.
The problem was, in the beginning, Gatorade was nasty because it was intended to mimic sweat!
It actually made Dr. Cade throw up the first time he tried it.
Knowing nobody would willingly drink something that tasted like sweat, they added sugar and flavoring to make it palatable and to provide a quick form of energy for the players.
The result? The Florida Gators started winning and after their head coach credited Gatorade for their success, it spread like wildfire. 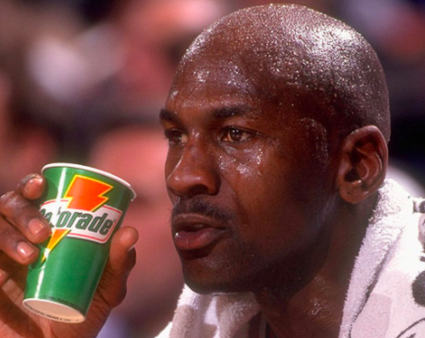 Soon Gatorade spread to all major American sports and they recruited the greatest athletes to represent the brand. (See the picture above.)
Gatorade saw a major marketing opportunity and utilized its partnerships with high-profile athletes to sell it to the masses as a daily hydration aid.
The problem is, what works for professional athletes and an everyday person is very different.
On average, an NBA player burns 1000 calories for every 20 minutes they play during a game, not including warm-up time.
An average NFL player burns up to 3000 calories in one practice.
In contrast, a moderately active man burns only 2600 calories per day.
So, if you're not a professional athlete chugging Gatorade might not be in your best interest.
The sugar in Gatorade can be extremely harmful, and for most people, totally negates any hydration benefits you might get from the electrolytes.
Even the zero sugar options they later came out with are filled with artificial sweeteners and other harmful additives.
We're not going to dive deep into that but if you want to learn more about why you should watch out for artificial sweeteners, click here.

Gatorade isn't the only hydration drink that probably did more harm than good for the general public.
Other companies saw Gatorade's success and wanted a piece of it so copycats came onto the scene. (Think Powerade)
Because they essentially copied Gatorade, today, almost every widely available hydration drink has the same harmful ingredients whether it be sugar or artificial sweeteners.

The Next Wave of Hydration

Hydration drinks with sugar can provide quick energy and aid in rapid hydration but they should only be used for long intense exercise where you're sweating A LOT and your goal is optimum athletic performance.
For everyday hydration, a drink with sugar WILL do more harm than good and that's where Gatorade led us astray.
Does that mean hydration is not important?
Not at all, electrolyte replenishment is crucial even for sedentary people.
At HydroSwell, we saw this big gap in the hydration market and that's why we created ProLoco.
ProLoco is our totally Loco protein-infused hydration drink.
It's got hydrating electrolytes, energizing vitamins, protein to kill sugar cravings and create lean muscle, and natural caffeine (optional) to give you a boost!
We not only removed the sugar and replaced it with natural calorie-free sweeteners, but we also added protein to help kill sugar cravings so you can avoid junk foods and feel your best!
ProLoco is the next wave of hydration and the best part is, it's made with YOU in mind.
It's the clean way to fuel your adventurous life!
To learn more, click HERE!